Ohm's Law is the mathematical representation of electricity with regard to Voltage, Current, Resistance and Power (or Watts).  This is required information to know when sizing electric heaters, heating elements, electric water heaters and any high amperage appliances. 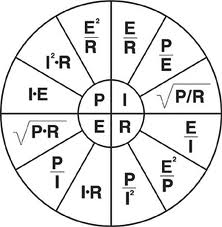 What is Ohm's Law:
Ohm's Law is made from 3 mathematical equations that shows the relationship between electricvoltage, current and resistance.

What is voltage? An anology would be a huge water tank filled with thousands of gallons of water high on a hill.
The difference between the pressure of water in the tank and the water that comes out of a pipe connected at the bottom leading to a faucet is determined by the size of the pipe and the size of the outlet of the faucet. This difference of pressure between the two can be thought of as potential Voltage.
What is current? An analogy would be the amount of flow determined by the pressure (voltage) of the water thru the pipes leading to a faucet. The term current refers to the quantity, volume or intensity of electrical flow, as opposed to voltage, which refers to the force or "pressure" causing the current flow.

Info: Ohm's Law was named after Bavarian mathematician and physicist Georg Ohm.
Ohm's Law can be stated as mathematical equations, all derived from the
same principle.
In the following equations,
V is voltage measured in volts (the size of the water tank),I is current measured in amperes (related to the pressure (Voltage) of water thru the pipes and faucet) and R is resistance measured in ohms as related to the size of the pipes and faucet:


Ohm's Law defines the relationships between (P) power, (E) voltage, (I) current, and (R) resistance. One ohm is the resistance value through which one volt will maintain a current of one ampere.

( I ) Current is what flows on a wire or conductor like water flowing down a river. Current flows from negative to positive on the surface of a conductor. Current is measured in (A) amperes or amps.

( E ) Voltage is the difference in electrical potential between two points in a circuit. It's the push or pressure behind current flow through a circuit, and is measured in (V) volts.

( P ) Power is the amount of current times the voltage level at a given point measured in wattage or watts. 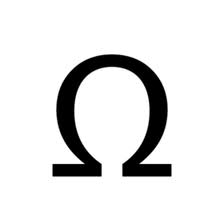 Posted by Anderson-Bolds Staff at 3:32 AM