Anderson-Bolds and Fenwal Discussion of Temperature Control and Controllers

The results you get with a precision temperature controller, as with any tool, depend on how skillfully it is used. It will produce close control only when the design and operating conditions of the system help it to respond quickly and accurately.
A controller is only one part of a heated system. Its job is to sense temperature at a particular point in the system, and, on the basis of what it senses, actuate some other device which changes the quantity of heat flowing into the system. A controller can respond only to what it sees at its particular location. It cannot react to a temperature rise or fall somewhere in the system until that information arrives at the sensing element. Generally, it cannot compensate for too much or too little heat being put into the system when the heat source is improperly sized. And, most important, it has no way of recognizing whether the temperature in its vicinity truly represents the temperature at the work area. Regardless of the capabilities of the controller, it can control no more closely than the design of the system permits. 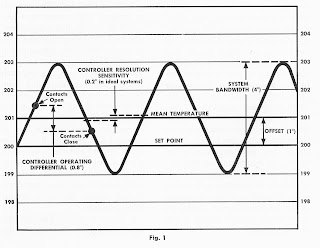 1. Heated System?
There are four elements in a heated system, ail of which contribute in some way to control performance.

A. Work (or Load): The material or product which must be maintained at a controlled temperature. The heat demand of the work may be steady; that is, the same material must be held at constant temperature for a prolonged period, such as a culture in an incubating oven. More commonly, the heat demand of the work is variable and cyclic; that is, cold material periodically enters the system, absorbs heat, is removed and replaced by another batch of cold material. An example of a variable system is a molding press which receives a batch of cool plastic, forms, cures and ejects it and repeats the cycle several times a minute.

B. Heat Source: The device which delivers the heat used by the system. The source may be electrical heaters, oil and gas-fired heaters, or any other source. The process may be exothermic; i.e., generate its own heat.

C. Heat Transfer Medium: The material which transmits the heat from the heat source to the work. The material may be a solid, liquid, or gas. Its transfer characteristics play a large part in determining how fast temperature changes are transmitted through the system and, consequently, how closely the system can be controlled.

D. Controller: The instrument which controls the heat flow on the basis of the discrepancy between the sensed temperature and the controllers set point.

2. The Meanings of “accuracy”.

The term "control accuracy" is frequently used rather loosely to denote several distinct and different concepts. For the sake of clarity, these concepts will be labelled and discussed briefly. (See Figure 1)

A. System Bandwidth: the total temperature variation—measured at some point in the system, usually at the work area. For example (See Figure 1), if the maximum and minimum temperatures in a system are 203 and 199°F, the bandwidth is 4 degrees. (Commonly this is referred to as ± 2°, though correct expression is 4°.)

The sensitivity of the controller contributes only partially to determining the bandwidth; several other factors relating to the over-all system (described in the following sections ) contribute importantly and sometimes decisively. Maintaining a very narrow bandwidth may be the primary goal to prevent overshoot in products or processes which are being heated close to their decomposition, vaporization or other critical point. Narrow bandwidth, by itself, does not guarantee constant temperature, since the mean temperature can drift. In many cases, constancy of mean temperature is relatively more important than a narrow bandwidth.

B. Mean Temperature: the numerical average of the maximum and minimum temperatures reached at some point in the system. For example (See Figure 1)  for a maximum of 203 and a minimum of 199, the mean temperature is 201. In a large number of systems, maintaining the mean temperature relatively constant, rather than maintaining a very narrow bandwidth, is the practical objective. The mean temperature (also referred to as the "control point") may or may not be the same temperature as the controller's set point. When they are not die same, an offset exists.

C. Offset: the difference between any two temperatures, such as between the setting of the controller and the mean temperature of the load when the system is at a steady state. In Figure 1, the offset is 1°.

3. A Practical Approach to Accuracy

The user of a thermal system is interested in one basic question: is the temperature control accurate enough to operate his product or process satisfactorily? Control requirements are far less stringent in a waffle iron than in a crystal oscillator oven. Maintaining exact temperature in a wax applicator tank is less critical than in a laboratory viscosimeter. The point is that exact control of a system takes time, care and money. Moreover, it takes highly sensitive measuring instruments and indicators—and frequent recalibration in service—to tell just how good the control is. Eliminating the last degree or fraction of a degree of temperature deviation is costly and should be done only for sound practical reasons.
Nonetheless, good control is attainable with standard instruments. To be sure, control will be no better than the capabilities of the controller, but unless the system is designed as an entity, there is little assurance that the controller can deliver what the user expects of it.

System bandwidth and constancy of mean temperature are the overall measures of control accuracy. They are affected by many factors:
A. Temperature Gradients—the range of temperature variation throughout the system at any given instant.
B. Thermal Lag—the time delay for a temperature change in one part of the system to be felt in other parts of the system.
C. Location of the Controller's Sensing Element—its placement relative to heat source and load.
D. Response Speed and Sensitivity of the Controller—these and other characteristics make up inherent controller accuracy. They determine how well it is suited for a given application.
E. Heat Balance—the capacity of the heat source in relation to heat demand from the work, plus heat losses.

Heat, like water, seeks its own level. It moves only from a higher to a lower temperature zone at a rate depending on the temperature difference and the conductivity or emissivity of the heat transfer medium. The three methods of heat transfer are: conduction, convection and radiation.

A. Conduction takes place in solids, liquids and gases. The heat is transmitted in a kind of chain reaction by the rubbing action of a "hot" or higher energy particle with an adjacent "cool" lower energy particle, while the particles remain in the same relative position to each other. A commonplace example is the gradual heating of the upper end of a spoon when the lower end is immersed in a hot cup of coffee.

B. Convection takes place in liquids and gases. It occurs when a stream of warm particles rises, mixes and diffuses into a cooler area. Convection from a heat source at the bottom of the structure is a common method of heating ovens and water tanks. Natural convection currents move slowly and it requires a fairly long time for a container of any reasonable size to reach uniform temperature. This makes accurate control practically impossible. When good control is demanded in ovens and liquid baths, forced convection, produced by blowers, agitators or recirculation lines will be necessary.

c. Radiation is a form of energy transmission which is emitted from a heated body. Radiant energy needs no heat transfer medium and thus can travel in a vacuum. The most familiar example of radiant energy is sunlight, which travels through the nearly empty outer space, the denser atmosphere of the earth and is finally absorbed by buildings and pavements. These structures then act as secondary heat sources by radiating much of the absorbed heat back to the surrounding atmosphere.
In most systems all three methods of heat transfer are present. A platen, internally heated by an electric heater, heats the work by conduction. However, heat may be lost from the surfaces of the platen both by convection and conduction to metal parts touching the platen. In an oven the walls and internal structures also become heated and these in turn radiate and convect heat back into the oven cavity.
These secondary heat sources, while useful in maintaining a stable heat level in the system, can nevertheless cause difficulty in a closely- controlled system by creating local concentrations of heat which can bias the sensing element if it is not properly shielded. Conduction and radiation of heat away from the sensing element by supporting fittings and fastenings can similarly produce a sensing error. Thus, the various ways in which heat moves in and out of a system have a direct, practical influence on temperature control. 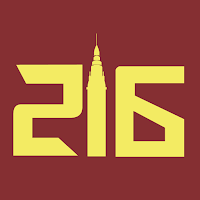 Posted by Anderson-Bolds Staff at 3:54 AM